Rome open city. Open to the world, art, myth. The great beauty recognised by everyone.

The history of the world passes from here and, for this reason, White Ostuni choosed the Capital to tell its one.

Synonymous of treatment and dynamism, Rome represents the
quintessence of every unforgettable experience, obliged step of all the beautiful memories.

On the occasion of its second national date, White-Ostuni-on-Tour choosed the location “Shari Vari – Playhouse”, a nightclub near Pantheon, temple of roman amusement.

Here, White Ostuni feels at home because to be in Shari Vari is like look itself in the mirror. Just as the White is a beach club changing and unconventional, even the playhouse looks like a flexible framework that can be adapted to the needs of the most inspired and most visionary events.

Friday, April 4th White Ostuni invites all to stimulate the five senses with a night characterized by vitality. A nightclub that becomes theatre with Apulia which dominates the stage. Food, music and entertainment will characterize an artistic and multisensory experience, because everything will taste “White Ostuni”. Even if eyes will recognize the colour white everywhere: in the decorative drapery, in the glasses, in the ceramics typical, all branded “White”.

Taste will be stimulated by an “aperi-white”, at h.8.30pm, a welcome drink, completely made in Puglia: wine Primitivo of Manduria, bagels in red wine, roasted almonds, Friselle with sun-dried tomatoes, olives and knots.

After satisfied the palate, it will be the sound to dictate the time. The night starts with a live music exhibition of the band “Audio Magazine”: rhythms ranging from the Cuban coast to the waterfront of Rio de Janeiro, through the reggae of Central Africa before returning to sound reminiscent of old Europe.

Then, the night will be entrust at Nico Rinaldi and Ciccio dbs’ dj set, with the vocalist Gabriella Cipriani. And so, the house rhythm will commemorate the pugliese beach club, its beautiful view in which faces and nature will mix up.

White city knocks at the door of eternal city. The sea that flows the sand of roman arenas.

For all of this reasons, miss it will be a…Capital…sin. 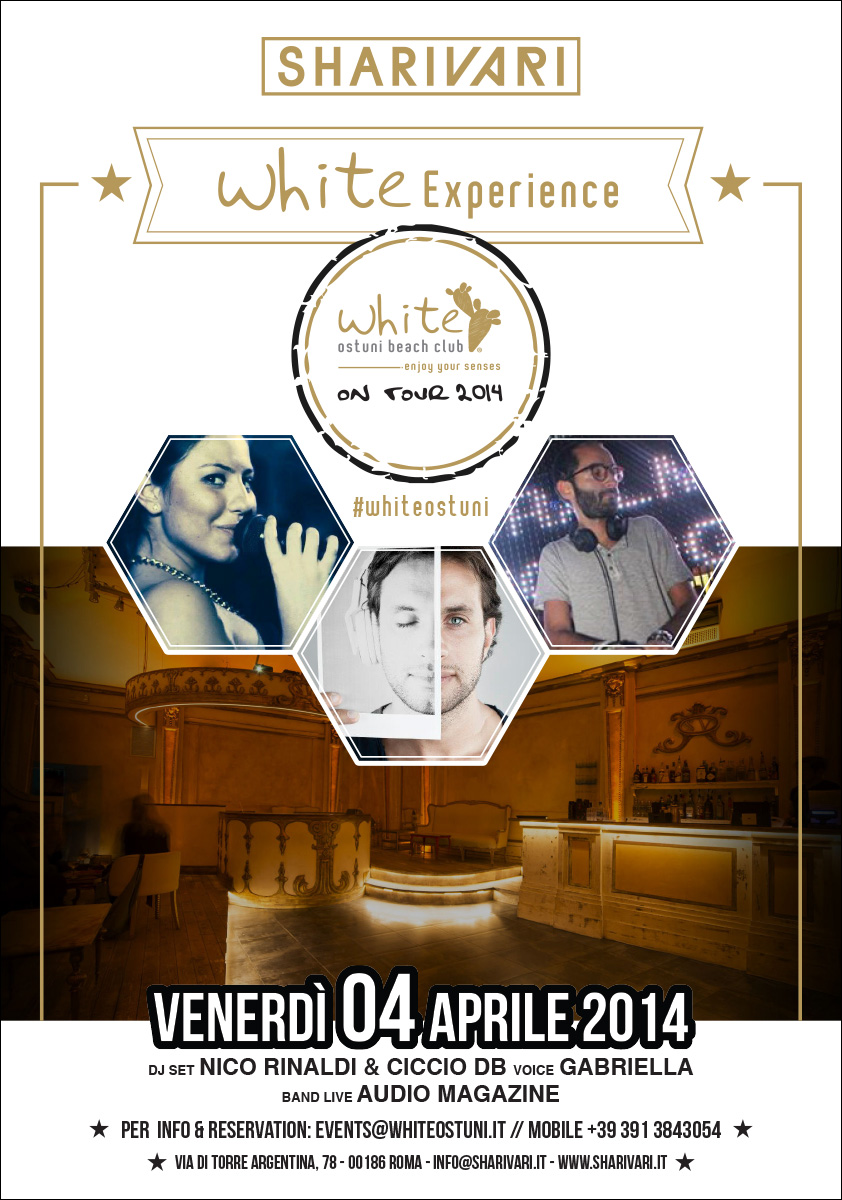